To our readers, clients, and friends:

At this unprecedented time, O’Connor & Partners is still here to serve all of your legal needs. Out of an abundance of caution, we, like many other companies, have implemented several measures to protect the well-being of our clients, employees, and community. Employees have been asked to work remotely and we are taking steps to practice social distancing and deep cleaning within all of our facilities. We have full access to your files and are able to be reached 24/7. 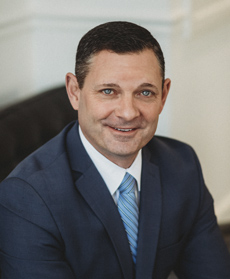 Kevin currently specializes in personal injury litigation and criminal defense. Kevin is a graduate of the University at Albany, where he received a Bachelor Degree of Arts in Economics. Subsequently, Kevin attended Albany Law School where he was the Third Year Class President and a member of a Trial Team that successfully won the Northeast Regional Competition in Rhode Island.

Achieving justice for the victims of injuries caused through the fault of others has been his passion since he began representing clients in the personal injury field. Fighting for the rights of clients throughout all phases of a personal injury case is what each individual deserves.

Prior to working in plaintiff’s personal injury law, Kevin honed his trial skills and gained valuable experience as a felony level prosecutor, for 8 years, with the Ulster County District Attorney’s Office. During the course of his career as a prosecutor, the District Attorney tasked Kevin with the responsibility of supervising the Ulster Regional Gang Enforcement Narcotics Team, a county wide task force handling violent felonies and drug cases. The cases Kevin has taken to trial have included charges such as murder, assault, gang assault, burglary, robbery, grand larceny, drug possession, drug sales, rape and criminal possession of a weapon. Kevin has successfully tried circumstantial evidence cases, a shooting case where the victim was not available for trial and a cold case burglary trial based on DNA evidence.

The experience as a prosecutor has helped Kevin tremendously in his representation of clients in personal injury cases. The prior experience of investigating all aspects of major felony cases and preparing them for trial has given Kevin an invaluable asset he applies to all his personal injury cases. He used to work tirelessly for those who were victim of crimes and now he applies that effort towards his clients in their personal injury case. The insurance companies hire attorneys and experts to defend their clients so it extremely important to be able to look at all the evidence and meticulously prepare to protect the client. Opponents have learned that if they are not prepared to meet the settlement demand, Kevin and the attorneys at O’Connor & Partners are thoroughly prepared to try the case in front of a jury.

Kevin has worked tirelessly throughout the State in County Courts, Supreme Courts, City, Town and Village Courts as well as in Federal District Court. His cases have taken him throughout the counties of Ulster, Dutchess, Orange, Greene, Sullivan, Troy, Albany, Rensselaer, Saratoga and Schenectady; as far west as Binghamton, and several cases in New York City. Kevin litigates multiple multi-million dollar settlements and verdicts for his injured clients.